I have been collecting suitable 00 Gauge rolling stock for the layout for a while now.  I think they'll set the scene and the era of the layout.  As I am hoping to model the 1930s period, 1932 to 1939 I'll need LMS stock, a few of the the Big Four's stock and some private owner wagons. 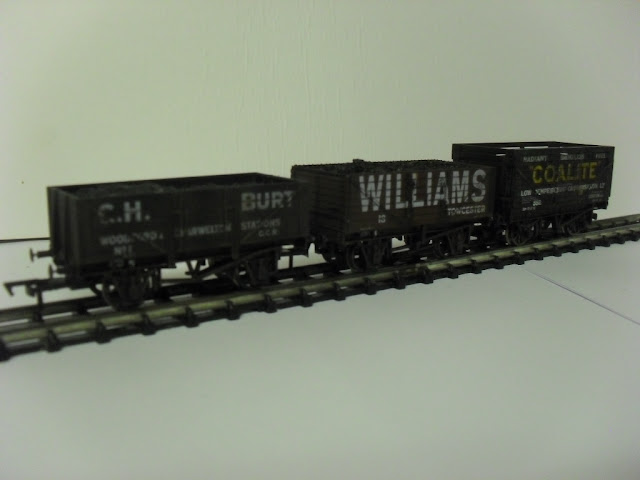 CH Burt was a coal contractor.  Based in Woodford Halse, some six miles from Blakesley, the station there was on the Great Central Railway but there was a connection to the SMJ line.  I have assumed a delivery of limestone is being delivered locally.  Williams was a coal merchant who was based at the SMJ Hub of Towcester.  An excellent picture of this wagon appears in the British Railway Journal.  The Coalite wagon was also photographed on the line.  As a smokeless fuel, coalite was popular amongst householders and Williams of Towcester regularly received deliveries of it. 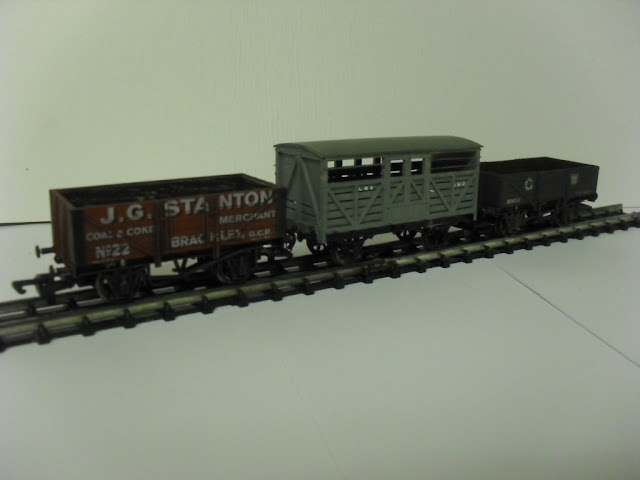 JG Stanton was a coal merchant based at Brackley six miles south west of Blakesley and where I was schooled.  Brackley had two stations, one on the Great Central mainline, linked to the SMJ at Woodford Halse and also the on the London and North Western Railway which connected to the SMJ at Banbury.  So although this is not strictly an SMJ wagon, it is certainly local.  The cattle wagon is a Large LMS (Midland) one.  Built from a kit, I bought this one ready made on Ebay as a bargain.  Cattle wagons were common on the line, there was a huge livestock market at Banbury and Cattle docks were a feature of most SMJ stations. I have photo evidence of the GWR 5 plank wagon at Towcester and Stratford upon Avon so I am happy to run it through Blakesley.

BLAKESLEY SMJ STATION MODEL
I am Simon Donal, an Army Officer who has had a long standing interest in Railways and local history. I am building a model of a rural station in Northamptonshire called Blakesley.